I will visit Occupied Jammu and Kashmir shortly. In preparing for this visit I have been interested to read about Australia’s involvement.

The way Britain, the former coloniser of this region, withdrew from the sub-continent in 1948 laid the basis for one of the most ruthless, long lasting and bloody occupations the world has witnessed. 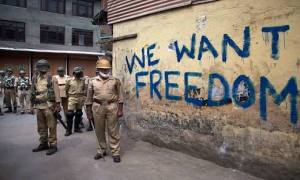 These Australian observers served in Kashmir until 1985. By that time 150 Australians had served under UNMOGIP. It is not clear if the Australian government withdrew in 1966 as they believed the dispute had been resolved or for reasons of political allegiance.

Also in 1950 the United Nations Security Council appointed Sir Owen Dixon, the Sixth Chief Justice of Australia, as UN Representative to organise a plebiscite in Jammu and Kashmir.

The plebiscite was never been held. This is not a reflection on Sir Dixon. It was a failure of the international community.

I share details of these historic links to highlight that the Australian government once accepted and fostered a role in the sub-continent.

The new Foreign Minister Marise Payne should not side step this issue as her predecessor did.

When I spoke on this issue last year I noted that the two nations that border Kashmir and Jammu, Pakistan and India, are both nuclear powers.

A responsible Australian government should be working to deescalate the current extreme situation in this region and find a solution that respects the wishes of the people of Kashmir and Jammu.

My visit to this region has come about through my work with Kashmiris now living in Australia and their supporters who are working for a peaceful and just solution. I am paying my own travel costs.