Smash the state – let’s be careful what we wish for

In the 1970s one of the most popular radical slogans was ‘Smash the State’. As the subsequent experience with neoliberalism has taught us, it is wise to be careful what you wish for.

Incredible as it must seem now, one of the chief selling points for neoliberalism was its claim to stand for slashing the size and power of the State. Certainly after the government bailouts of the financial sector and the exponential growth in the coercive and surveillance powers of the State, that claim is in shreds.

Try telling members of the CFMMEU about small government in the neoliberal age.

But we should also not ignore the truth in the claim. Neoliberals have reduced or gutted government – particularly in its ability to act in the people’s interest and welfare.

Over the past 30 years, for instance, both Labor and Liberal neoliberal governments have privatised huge segments of our common wealth as my pamphlet Sold Off, Sold Out details. Just in the past seven years the NSW Liberal-National government has sold off more than $60 billion dollars in public assets. Education, childcare, public transport and essential social services have been privatised across the country. 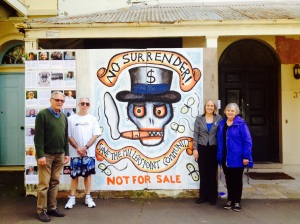 The same governments have stripped the public service of the expertise and powers needed to protect the public interest. Unchecked skyrocketing electricity prices and the impunity of the banks are obvious examples.

Just last week my colleague Greens NSW MP, David Shoebridge, used a parliamentary inquiry to highlight the fact that the NSW state government allocated $2.1 billion to a private corporation to build the eastern suburbs light rail without adequate safeguards to protect the public interest.* The project is now 12 months behind schedule and yet the maximum penalty in the contract for failure to deliver on time is $7.5 million – less than half of one per cent of what is being paid to the private consortium to build the line.

David’s point was confirmed by the evidence of the Auditor-General. She told the inquiry that Transport for NSW “did not effectively manage the planning and procurement process to ensure that NSW had value for money from this project”.

Predictably the price of the project – paid out of public funds – has blown out by more than 30 per cent since it was announced.

Some of the explanation for these lop-sided deals lies in the mass neoliberal conversion of managers in the public service. They truly believe in these Public Private Partnerships. The fox is in the henhouse. As long ago as the late 1980s, research by Professor Michael Pusey of the University of NSW showed the extent of this embrace of neoliberalism. We did not heed his warnings and these days the revolving door from the public sector to private business appears to be the norm. One example among many is the case of Jennifer Westacott, the current CEO of the Business Council of Australia. For over 20 years she held key leadership positions in the New South Wales and Victorian governments.

Another part of the explanation is the gutting of public service expertise and competence – by the outsourcing and privatisation of its functions, often to the lowest bidder.

Last year Richard Mulgan, emeritus professor of public administration at ANU, described this hollowing out of the state in the Sydney Morning Herald: ‘… the use of contractors has caused [the public service] to run down their in-house expertise and technical resources. As a result, it can be argued, agencies lack the capacity to assess whether the contracts they are agreeing to give the government and taxpayer adequate value for money.’

Ironically Rupert Murdoch’s Australian complained in December last year about the expense of this privatisation of the public service – the cost of consultants was estimated by the paper to be $10 billion annually for the federal public service alone.

The rundown of the public service is set to go even further with the federal government launching an inquiry into the future of the public service. Four of the six members of the review panel are CEOs or bankers. Little wonder the Guardian Australia reported: ‘The Community and Public Sector Union is concerned the number of private-sector appointees to the review indicates the government’s tendency is to increase contracting out.’

One sure way to avoid the pitfalls of these Public Private Partnerships is not to sign up to them. Sydney’s light rail projects are still being described as public transport, even by Greens. They are not. They are privately owned and operated mass transit systems. Their ultimate purpose is to turn a profit, not to provide a service. It is time we insisted on publicly owned and operated public transport.

This would involve rebuilding the capacity of the State. Personally I support the withering away of the state’s coercive powers – inhouse or outsourced, starting with Border Force or Serco – but a well-resourced public sector and independent inhouse expertise is clearly in the public interest.